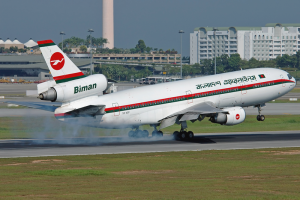 In December 2017 my family and I took a direct flight from Heathrow to Sylhet on a Biman Bangladesh Airline flight. At Heathrow Airport the flight schedule clearly showed the flight will depart from London Heathrow as planned and will arrive in Sylhet Osmani International Airport the next morning. Everything went smoothly at Heathrow and we boarded the flight without any delays.

Throughout the journey the onboard flight planner showed the plane was due to land in Sylhet as scheduled. My family and I rested and slept for a while and the next morning we were looking forward to landing at Sylhet Airport. Instead we were interrupted by the Captain announcing that due to a technical fault the flight will be re-directed to Dhaka. All the passengers were unhappy with this announcement and started to complain to the flight stewards. One passenger demanded to see the captain and made a lot of commotion but eventually settled down.

Our plane landed at Shahjalal International Airport in Dhaka at the scheduled time when we were supposed to land in Sylhet. The Captain apologised and said this was beyond their control and could not have been foreseen. While the passengers were getting ready to depart the Captain made another announcement and said that all passengers going to Sylhet should remain in their seats as the plane now could take off and land in Sylhet. All the passengers were really excited by this news and were relieved that they do not have to dis-embark and land in Dhaka. However, this excitement was short lived as the Captain soon announced that all passengers must depart. Everyone on the flight were very upset, and few passengers started shouting at the air stewards. While I do not condone such abusive behaviours, I could understand their frustration.

We all dis-embarked from the plane and walked into the terminal building. The staff at Shahjalal International Airport was very unhelpful as usual providing no information, phone or emails service or any food and drink. Every time any passenger enquired, they just made a different excuse. After waiting more than 3 hours the Airport staff came and asked all passengers to get ready for departure. Eventually we landed in Sylhet Osmani International Airport more than 4 hours later than scheduled.

My family and all the passengers on this airline were mistreated and I promised myself that I would take action once I returned back to the UK. Under EU Law passengers may be able to get compensation if their flight either:

If your flight is delayed for long enough, your airline has to give you: 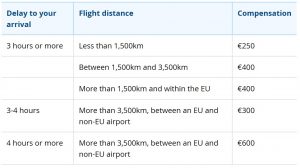 You are entitled to a set amount of compensation depending on the distance of your flight, the length of the delay and whether you’re flying to an EU or non-EU destination.

I wrote to Biman Bangladesh Airline upon my return to UK and explained what happened and demanded compensation under EU law. The Airline replied to my letter and stated due to technical fault this was something beyond their control and as such we were not eligible any compensation.

I could have at this stage given up and took no further action. Instead I contacted a solicitor’s firm and they agreed to take on my claim on a no win no fee basis. There are many companies offering this type of service and I used Bott and Co Solicitors as they were reputable and one of the largest in this sector. They do charge 25% fee, but it is well worth it as they take all the risks and provide regular update on your claim.

If you were affected by any flight delays please visit Citizen advice and follow their advice.