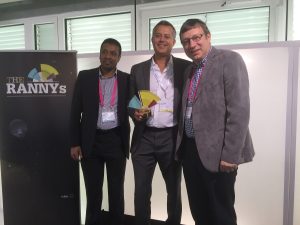 MBNL (on behalf of EE and Three) has been awarded Best RAN Sharing Agreement at the global RAN World Event in Germany. This is the second year running MBNL has won this award thanks to the amazing joint venture agreement between EE and Three and with the support of all the vendors, suppliers managed by MBNL.

The judges commented: “MBNL is one of if not the largest active network sharing initiatives the world has seen. Its resilience through a merger of one of its sharing partners as well as being able to integrate with unilateral 4G networks just goes to show what a great job the team are doing”.

The other shortlisted entries were:

MBNL was represented at this award by Steve Giles, Head of RAN Design and Sundar Ali Senior Radio Design and Performance Manager. Mansoor Hanif, Director of EE Radio Access Networks also attended this conference and was pleased to receive this award.

MBNL has been a global benchmark for network sharing joint ventures since 2007 when mobile operators EE and Three UK signed a ground breaking network consolidation agreement.