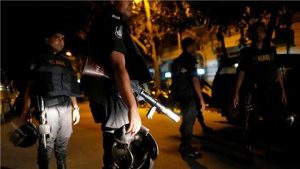 According to various news sources elite commandos on Sunday battled to neutralise Islamist terrorists holed up in a building rocked by fresh explosions, hours after six people were killed and over 50 others injured in blasts claimed by the Islamic State outside the complex in Bangladesh’s north eastern city of Sylhet.

Previously two explosions ripped through a crowd on Saturday, killing six people and injuring around 50 others in Sylhet as army commandos stormed a terrorist hideout, police said.

“A ban has been enforced barring entry of ordinary people within the vicinity of the building as final preparations were underway to flush the militants out from their den,” a police officer told reporters on the scene.

At least three blasts were heard from inside the five-storey ‘Atia Mahal’ since 9.57 am (local time). A huge blast near the building tilted it towards one side, the Daily Star reported, citing its photojournalist who was on the spot. Photo is a representation.