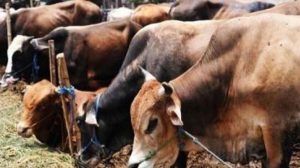 Cattle Traders have been selling lives stocks for centuries across all regions of Bangladesh but what makes Biswanath so famous for this trade? Why does some people use that trading link to rub one’s nose and why does some people get upset when they are asked if they trade in cattle?

I want to explore some of these questions in this article as I was born in Biswanath and my family have been living in Biswanath since my Great-Great Grand Father decided to move there from Bayar Par in Sylhet.

What makes Biswanath famous for Cattle Trading?
In the past the fastest selling commodity was animal livestock and in particular cattle. Biswanathi traders are the ones who invented this most profitable trade in the whole of Sylhet and it was mainly the Biswanathi traders who sold cattle live stock in Khazir Bazar, Sylhet. Now it is classed as an international business throughout Bangladesh and around the world as people are investing heavily in livestock trading. 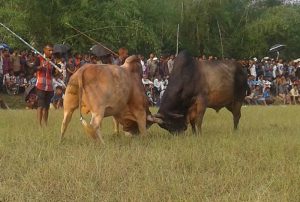 Government under pressure from Western countries. The owner of a Bull that won any prize instantly became overnight celebrity and so was the bull. Owning a bull was costly as they required the best cuts of rice shoots, luxury living conditions and regular pampering. It was not uncommon for bulls to be kept inside mosquito nets and in air-conditioned premises. It is clear Biswanathi people are passionate about cattle and cared for their animals whether it was for trade or sport.

Why does some people rub one’s nose about Cattle Trading?
In the past I never took notice of some people bringing up the subject of cattle trading whenever they met people from Biswanath. However earlier this year my wife’s newlywed sister came to visit the UK with her husband. I went to meet them at her brother in-laws house and during a casual conversation the brother in law asked where I was from and when I mentioned Biswanath he made a joke about whether I was planning to visit Biswanath during Eid al-Adha this year and whether it was for business. You might think how is that a joke or a rubbing of nose. During Eid al-Adha (aka Qurbani Eid) cattle is a primary Qurbani animal and the cattle market is at its peak. Reference to Eid al-Adha and whether I might be visiting Biswanath for Business is a snipe at the Cattle Trading connection of Biswanath. I personally was not offended by that and also joked about my plan to visit for business purpose. Both of us laughed the matter off and talked about how some people do get offended and why it makes no sense as this is far better than many other illegitimate trades.

Why does some people get upset when they are asked if they trade in cattle?
If you look at how cattle trading markets around the world have developed into multi-million pound businesses owned by ordinary businessman to elites and royalties alike it could be far from a trade where anyone should be embarrassed by association. However, I know some people from Biswanath who do get upset or embarrassed by anyone joking about cattle trade in the Upozila. Though I am an Engineer by trade, If I had to choose between being a Cattle Trader or a Politician, I know which trade I would choose. I think there are many more trades that are far worse, harmful to health and can even lead to premature or actual deaths.

Let’s start with the fruit and vegetable market in Bangladesh where traders wanting to make a fast buck are lacing the fruits and vegetables with formalin. Traders use this chemical as a preservative and to make fruits and vegetables look fresh for longer periods. Formalin has a bad effect on eyes and nose but can also cause cancer as it is a poisonous substance harmful to health.

The corrupt police, civil servants and politicians that take bribes in Bangladesh are cancers that eat away the fabrics of our society, damaging our economy and bringing misery to people’s lives. Those so-called professions are associated with the middle classes and elites of Bangladesh, yet in my eyes they are far worse than trading in cattle.

Finally, what about our many Doctor’s Surgery and Private Clinics and Hospitals where all the medical staff are interested in is making money out of each patient. I know Doctors have a duty to protect their patience above any financial gains, however I have seen first-hand in Bangladesh where Doctors are prescribing unnecessary medicine and or requesting multiple tests that are not necessary to treat the patience. Their motivation is making money as they either earn commissions or have shares in the Pharmacies and businesses where the tests are carried out. I would much rather be a Cattle Trader than a Doctor with no conscience.

I hope this article has given you some food for thoughts but welcome your comments and feedback to stimulate further discussions around this topic.