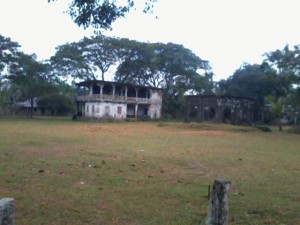 Dewan Hason Raja was born on 21 December 1854 in Rampasha, Bishwanath Upazila of Sylhet District and was the son of Dewan Ali Raja. His mother was Hurmuth Jahan Bibi, the last and fifth wife of Ali Raja. He spent most of his childhood in Sunamganj with his mother. At the age of seven, his father started living in Rampasha of Lokkishiri and he managed and looked after he’s paternal family properties.

Hason Raja took over the property management at a very young age after the death of he’s elder brother Ubeydur Raja and very shortly he’s father.

There isn’t much left today other than the premise and surrounding land but it is worth a visit to connect with your roots and to find out more about the history of Biswanath. Picture above was taken in 2012 by Sundar Ali.

To visit the Hason Raja Memorial from centre of Biswanath will take around 18 minutes by car and longer by Rikshaw or public bus. Head west on Court Rd towards Z2016 for 66m  and turn right at the 1st cross street onto Z2016 and then turn left after 6.3km onto Biswanath-Singerkatch Rd and after 230m you will arrive.

You can find out more about Hason Raja and he’s life by visiting the Hason Raja Museum at Lokkonshri, Sunamganj and the Museum of Rajas’ at RajaKunjo in Sylhet. Picture of map on left source is Google Maps.