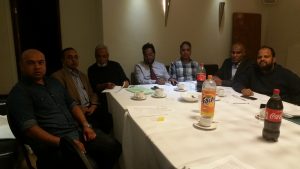 Biswanath 8UK an organisation dedicated to working for the habitants of Biswanath held a Committee meeting on Monday 22nd May 2017 at Crescent Hall, Luton, United Kingdom.

The purpose of this meeting was to review progress of key Biswanath 8UK activities and new project proposals. The committee discussed the inauguration meeting plans for September.

The organisations members agreed to defer further vacant post nominations until a later meeting to be held on 3rd July 2017.

The committee reviewed and discussed progress of the Biswanath 8UK book and thanked the editorial team for their hard work and dedication.

Biswanath 8UK is an organisation based in the United Kingdom with interests and ancestral roots in Biswanath Upozilla of Sylhet District, Bangladesh.

To unite all the habitants of Biswanath throughout the World, to work collectively to the development of its habitants, identify issues that relates to Biswanath, prioritise issues and find sustainable solutions that can be developed in a way that benefits the habitants of the Upojilla.