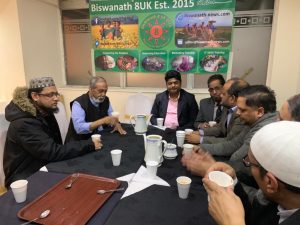 Biswanath 8UK an organisation dedicated to working for the habitants of Biswanath hosted a welcome event for Advocate Alamgir Chairman of Ramapasha Union and all their members and other Biswanathi people on Tuesday 12th February 2019 at Annando Mahal Restaurant in Luton.

The purpose of this meeting was to welcome our chief guest Advocate Alamgir Chairman to Luton and provide a platform for our members and other Biswanathi people to raise any issues or concerns to the Chairman.

A meeting is planned by Biswanath 8UK on Monday 18th February in Luton to review the constitution and discuss ongoing projects.

Biswanath 8UK is also planning a charity dinner party in June 2019 to be held in London to raise funds for one project selected by the organisation.

Biswanath 8UK is an organisation based in the United Kingdom with interests and ancestral roots in Biswanath Upozilla of Sylhet District, Bangladesh.

To unite all the habitants of Biswanath throughout the World, to work collectively to the development of its habitants, identify issues that relates to Biswanath, prioritise issues and find sustainable solutions that can be developed in a way that benefits the habitants of the Upojilla.